The Walking Boat trips up!

Credit: Dylan Woolf
Time and tide wait for no man - and the creator of the capital’s first walking boat was no exception today.

Andrew Baldwin’s Walking Boat, a massive 40 foot, 20 ton salvage-built seafaring vessel, drew a huge crowd to the Thames foreshore to watch the red and white barge, turned work of art, walk its way out of the water using kinetic powered metal ‘feet’ . But the turning tide and the shelved shore outside the Tate halted the boat right on the edge of the water. The cogs turned and the levers raised and lowered, but the Walking Boat could only move a few feet and wasn’t able pull its full weight onto the beach. 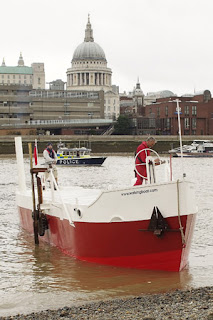 Credit: Willem van de Horst
The mechanical wonder made four strenuous attempts to defeat the pull of the tide. Hundreds of people on the bank and looking out from the balconies of Tate Modern willed the artist Andrew Baldwin and his intricately handcrafted vessel forward, but the boat took its first movements, only to be driven back. The frustration for the artist was palpable – his two years building the mechanism, and a smooth sail from Sandwich up the Thames to East London had resulted in a perfect trial run. But today’s audience outside Tate Modern was to be disappointed. 
Thanks to Willem van de Horst for his photographs of the attempted landing on Flickr
Posted by Walking Boat at 02:00 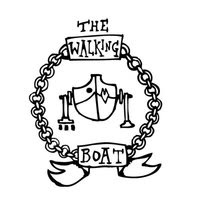 The 'Walking Boat' is an extraordinary, kinetic work of art created by sculptor, Andrew Baldwin. His astonishing piece, a 40ft walking boat, will be sailed from Sandwich into the heart of London, where it will walk out of the Thames onto the river’s foreshore at Tate Modern.

The general public will be able to see this astounding 20-ton mechanical marvel, which is not to be missed, on Thursday 14 October at 12.30pm.